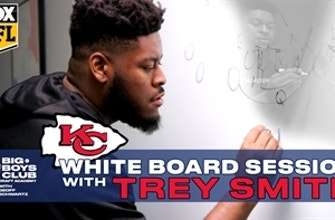 Former 8-year NFL offensive lineman, Geoff Schwartz and offensive line guru, Duke Manyweather, come together to bring you the ‘The Big Boys Club’ – a series dedicated to offensive lineman centered around five of the top O-lineman in 2021 NFL Draft. Geoff and Duke give a raw look into their white board sessions with the former #1 recruit in the country and 5th Round pick to the Kansas City Chiefs, Trey Smith, diagnosing defensive coverages and his ability to process offensive schemes during his pre-draft preparation!