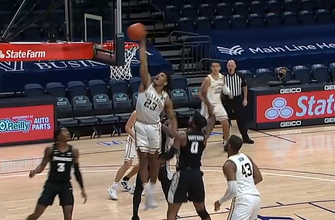 The third-ranked Villanova Wildcats remained unbeaten in Big East play after topping the Providence Friars, 71-56. After a slow start in the first half, the Wildcats went on a 7-0 run and never looked back. Collin Gillespie filled up the stat sheet with 15 points, six assists, and five rebounds while Jermaine Samuels scored 10 points, grabbed 10 rebounds, and dished out four assists in the victory. David Duke and Alyn Breed notched double-doubles to pace the Friars.