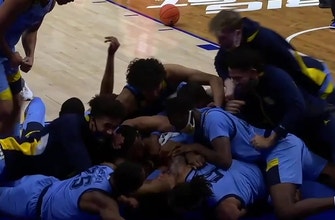 The Marquette Golden Eagles beat the No. 4 Wisconsin Badgers after Justin Lewis’ tip-in buzzer beater off D.J. Carton’s missed free throw. Carton was fouled with nine-tenths of a second left in the game and tied the game by sinking the first free throw. He missed the second shot and Lewis tapped it in. Lewis had the hot hand all game long and finished with 18 points and eight rebounds.