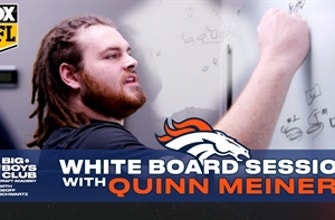 Former 8-year NFL offensive lineman, Geoff Schwartz and offensive line guru, Duke Manyweather, come together to bring you the ‘The Big Boys Club’ – a series dedicated to offensive lineman centered around five of the top O-lineman in 2021 NFL Draft. Geoff and Duke give a raw look into the their white board session’s with the sensational D-III Guard/Center drafted in the 3rd round to the Denver Broncos, Quinn Meinerz, to show his progression transitioning from Guard to Center and his ability to process defensive coverages during pre-draft preparation!